After playing tough and/or frustrating games like Sekiro and Outward endlessly for the past couple of weeks, Okomotive's FAR: Lone Sails offered a sweet, sweet refuge I couldn't be more grateful for. A side-scrolling puzzle-lite game, with no dialogue or enemies, FAR proved to be a simple, reflective journey. 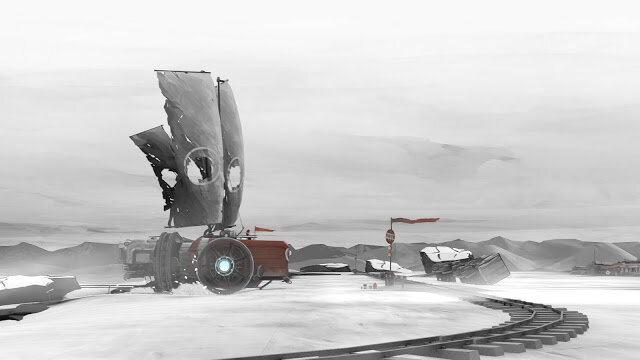 You play a small nameless character in a desolate world, alone and mourning the loss of a loved one (whose grave you'll find yourself at as the game begins). The game's description being listed as: “FAR: Lone Sails” is a vehicle adventure game. The player needs to maintain and upgrade their unique vessel to traverse a dried-out sea." 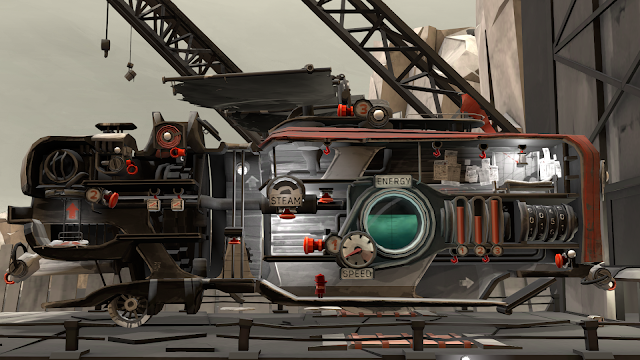 One of the devs has been posting on Reddit and was asked to pitch the game for everyone: 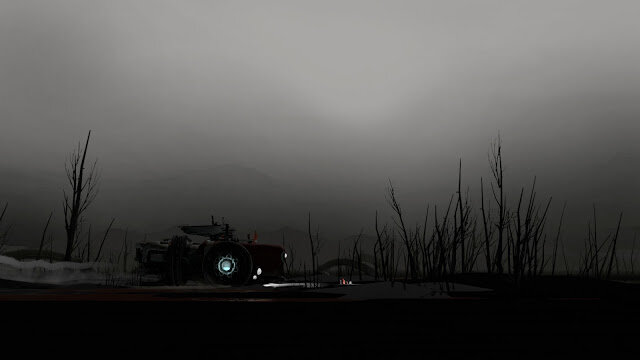 gamedevM: It's basically a journey you take. It's you and your rickety vehicle vs. the environment. You have to take care of your vehicle by collecting flotsam, burning it in the oven to generate fuel, set the sail when the wind is right, repair broken parts etc. You mainly travel, discover what happened in this place and overcome obstacles together by solving puzzles. 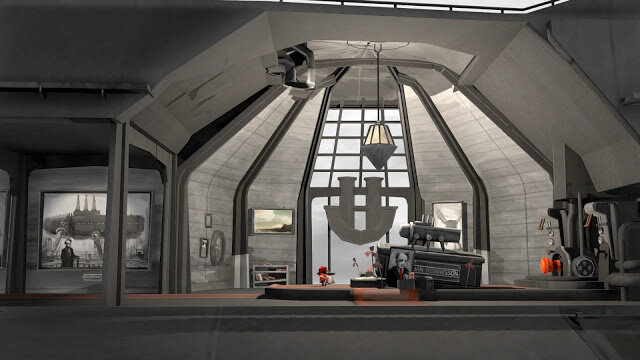 A perfect description, from one of the people who knows best. It truly is a wonderful, relaxing game, and can be completed from start to finish in under two hours. 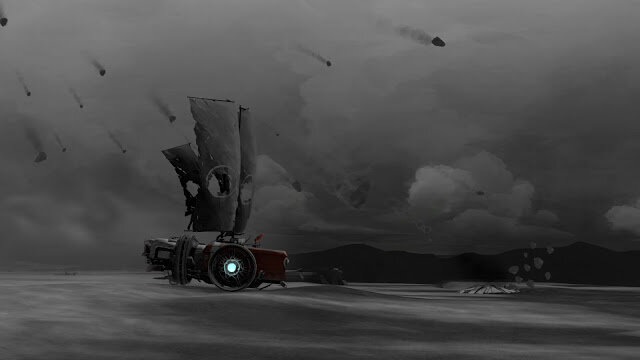 Shown above, you can see the different areas of your vehicle, including your energy tank, steam meter, and more. At the far left, marked with the number 2, is the fuel converter, where you'll place an item (such as boxes, tanks and even chairs and radios) and have it converted into fuel to keep your little land-ship running. You have to jump from area to area in order to keep your landship moving properly, from filling the tank, to pushing the big button to increase the speed, to releasing the steam valve when the pressure gets too high (which gives you a handy little speed boost too). Just to the right of the steam meter is a button that you boop with your head to brake - not doing so, and going too fast when approaching a wall with make you crash, and can lead to various parts of your vehicle to go on fire, and need repaired.

Different parts of the vehicle will get upgraded as you progress, such as gaining the sail to begin with, improved wheels and add-ons such as a vacuum to hoover up useful items for refueling. The vacuum is a great addition as refueling the tank is required frequently, however, even in the absence of the vacuum you can manage fine - simply needing to hit the brakes and manually collect the crates and such yourself. Having your sail raised can help further, as even without fuel the wind will propel you forward slowly but surely.

The game's score fits beautifully with not only the setting, but the often peaceful pace in which you journey across this abandoned world. Art style is beautiful, with muted tones with the occasional pop of colour for your fuel and the various buttons you'll need to use - making these stand out due to their importance.

As you travel, you come across various buildings and locations that provide a slight puzzle for you to solve in order to progress. These are simple enough, with the main requirements being to either hit a button or refuel something. It's a nice change of pace to prevent the game from solely taking place in the confines of your ship, albeit you'll find that to be a comfort - protecting you from the elements through harsh weather changes.

With FAR: Lone Sails being a fairly short game, the ability to 100% all of the achievements seemed to be a hopeful prospect, especially after completing the game and realising I only had two left to unlock. One of the two I had left was to reach 9001 on the distance counter. I'd reached something like 5000 on my first run (which is apparently surprising, as most people seem to have been around the 3500 mark), which I think was mostly down to replaying two stretches due to bugs: the first, causing me to be unable to pick up any items (after an item I was holding somehow pinged away from me), and the second caused me to become trapped after going through a hole in the ground earlier than I should have, and coming back up, preventing me from getting back down there when required! As the counter carries over on multiple playthroughs, replaying these sections boosted my counter up to 5000+ so I was excited to see I could complete the "It's Over 9000!" (DBZ reference highly appreciated in this household) achievement after just one more run...However, the game crashed during the end credits and when I began my next run my counter had reset to 0.

The other achievement would have been awarded for completing the game in under 99 minutes, which I think I missed by a grand total of 5 minutes on my second playthrough - but after the distance counter resetting, I had already gotten quite frustrated about my achievement hunting plans. I almost, almost didn't bother playing it through to completion for the second time, knowing the 9001 achievement was already going to be out of reach, but I already wanted to replay that last stretch of the game, shown below.

The game comes to a close with a satisfying yet sombre end. A melancholy end to a story that has no real story - no dialogue, no long drawn-out explanations for things, just whatever the game manifests as in your mind. The relationship between you and your landship draws to an end, and already the game makes you want to play again.