id Software's latest title - Doom Eternal - is a fun yet frustrating foray into the hellscape once again. Earth is overrun with demons, and you - the aptly named Doom Slayer - are the only one who can stop them. 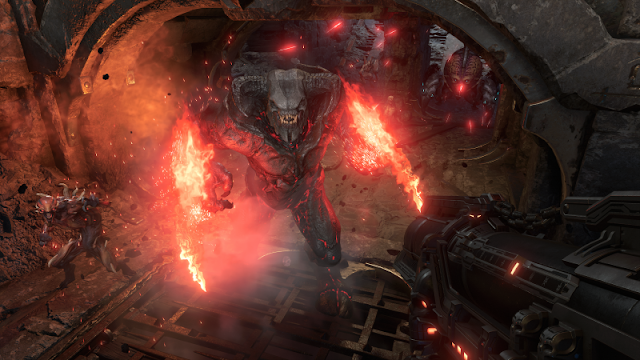 If you played the previous game, you will be familiar with some aspects of the gameplay. But here, it has been cranked up to be even more manic and fast-paced than ever. In order to survive, you'll need to be quick thinking and be aware of your surroundings. Combat is furious and rarely slows down, but with a fancy-shmancy new advance Praetor Suit, you'll have access to new tools and fantastic new weapon upgrades as you progress through the campaign. 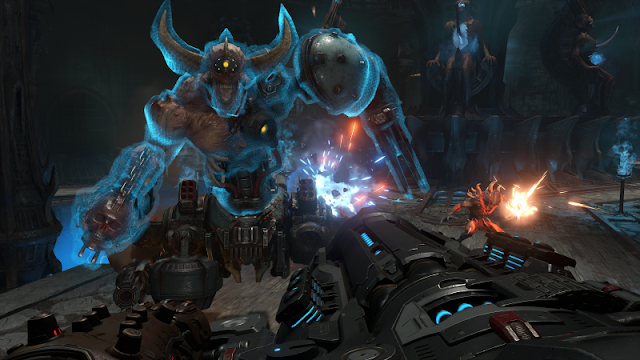 Managing your ammo and health feels harder than it did in Doom, with them being dropped as you defeat enemies. Your weapon can be modded to enable different ways of taking out the demons. Your initial weapon, the Combat Shotgun can be altered to allow Sticky Bombs to be fired - a great option for facing off against Cacodemons - but can also be modified to add a Full Auto option to mow down enemies and deal massive amounts of damage quickly. Utilising your weapons to the best of their abilities, and upgrading them when you can will help you to survive. The art design is stunning, and really pulls you into the world of Doom. That, combined with the once again fantastic soundtrack - composed by Mick Gordon - you really feel the weight of the world on you as the heavy-metal eggs you on in your quest to slay the demons. It's got to be said that Doom Eternal, and its predecessors, have some of the best sounding, most fitting music in all of games. It just goes so well with all of the carnage, blood and hellfire that is going on around you. Ugh, and to get a Glory Kill on a big enemy and it ties in with the beat - glorious. 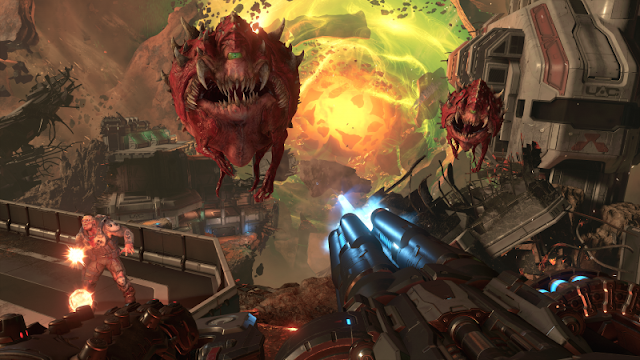 Glory Kills still feel so good, with enemies flashing once staggered indicating that now is the time to go in for the kill. Doing this helps to keep your health up, as this is one of the guaranteed ways to get a health drop. Using your Chainsaw also feels so satisfying, however, you will have to manage your ammo for this, too - gas cans can be found dotted around levels, but are in short supply so try to refrain from wasting them. A Chainsaw kill will grant you plenty of ammo for all other weapon types, so it can be useful to hang fire on this until you really need it.Multiplayer has been adapted for this release, with a new Battlemode to replace the previous game's Deathmatch. Battlemode is a 2v1 variation, where two demons go up against one Slayer in a fight to the death. It's a fun new way to play and try out different enemies and see how best to utilise them, but as big fans of the original Deathmatch mode - we were more than a little bummed out to see that that's been taken off the menu entirely. 2016's Doom was a fantastically entertaining return to the franchise and kept us hooked long after the campaign was over due to the addictive-as-hell multiplayer. Doom Eternal is another amazingly fun release, but with the removal of Deathmatch we were gutted. Deathmatch didn't have a lot of critic support back during Doom's release, as many felt it strayed too far from the core elements of the Doom franchise, but conversely, many fans are now petitioning for it to be added to Eternal in some form of post-launch update. It's definitely something we'd love to see come back, as we had a lot of fun with it last time.