Mindshaft Games' Demon with Shotguns is a fun couch-multiplayer arena game, where you and up to three friends can compete - or work together - for souls in nine different game modes. With six playable characters: Demon, Deceiver, Death, Preacher, Nun and Angel, you can fight across 40 different arenas, so there's plenty of variety here to keep things fresh. 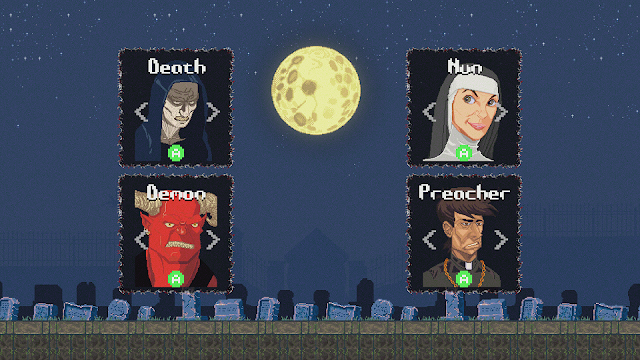 Done in a simple pixel-art style, the game was originally released back in 2016 on Steam but has finally made its way to consoles. Online multiplayer probably would have been a good addition to the newest version, but it appears local-only is the way it'll stay. Multiplayer is definitely the core element of Demons with Shotguns, but it can be played alone in its "End of Times" mode, which is just as well, since it's not everyday you can get a decent group together to play when you're -sob- getting older and have kids.

Rounds are fast and frantic, easily lasting just a few minutes each. The controls are responsive, if a little floaty, but jumping around the screen feels good. It manages to avoid feeling boring or drawn-out like some other arena games, as the levels are over almost as quickly as they begin, allowing a lot of variety in who wins each round as things change so much. 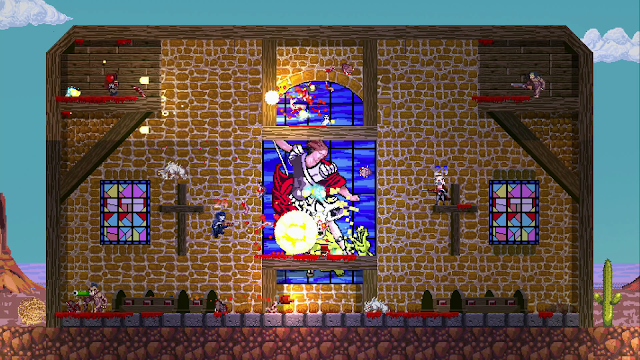 Ammunition is limited, which means you have to think carefully before you waste it all. An ammo box is available, so planning out your attack to conserve enough to get you there is a wise choice. On the occasion where I'd waste all my bullets, I'd be cursing myself as I tried to fight my way there whilst feeling very vulnerable.

Pick-ups change the gameplay enough to keep things exciting too, with Tarot Cards affecting all players either positively or negatively at once, with various effects being available like Angel Wings, Super Speed and Damage Multipliers on the positive side, and Sands of Time (which slows down the whole level) or Possessed (which makes you fire constantly in the direction you're facing) on the negative. These add a level of hilarity very reminiscent of our days playing IDARB, and laughing our asses off at simply being unable to control ourselves until the Hashbombs - as they're known in IDARB - wear off.

Priced at £10.74 on the Xbox Store, it's a cheap-enough game for what it entails, and if you're looking for some multiplayer-arena type games to play while friends are over, this might just go down a treat. Its simple aesthetic is visually appealing without being too bland, and the original soundtrack by VHS Glitch worked well.