Big Pharma is a management sim in which you produce pharmaceutical products with the goal of making money. This is the second game developed by Twice Circled, the first being another management sim in the form of Megaquarium. 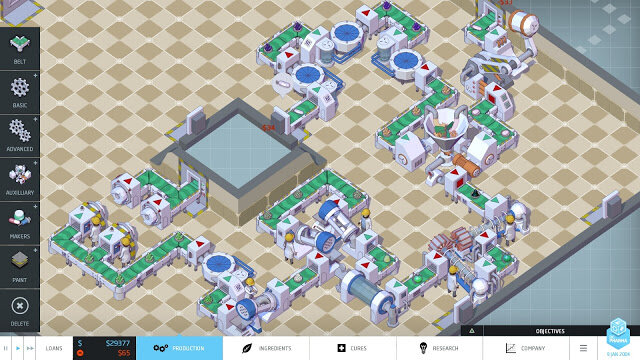 Despite starting off with a tutorial to ease you into the inner workings of your soon-to-be money making machine, I was already flummoxed. The UI feels clunky and awkward on Xbox One, and looks like it would work significantly better on PC. Some instructions threw me off by telling me to build a certain machine, yet that machine not being available in the options - except it was, it just was named something different. I don't know if this is just a technical issue, like a glitch in the coding or just wrong information input whilst naming items. 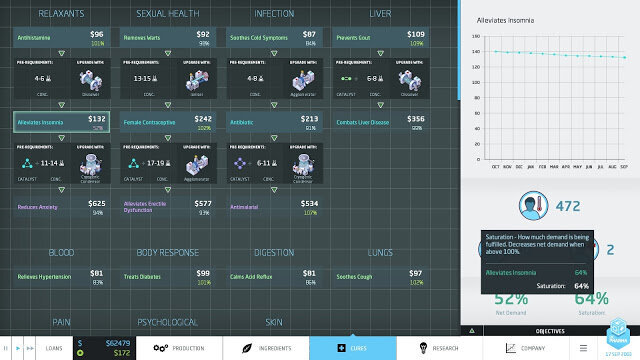 What first caught my attention with Big Pharma is the concept of running your own business, and the battle against competitors for your products to do well. Creating the required production lines and working out the best way to maximise your profits is an intriguing concept, and one that drew me in. I like the repetitiveness of games like these, as it can feel quite soothing to just lose yourself in to it. The challenge of figuring out how to have your lab laid out to utilise the space most effectively, combined with learning what machines are needed to get the desired effects whilst negating the harmful aspects of the medication. 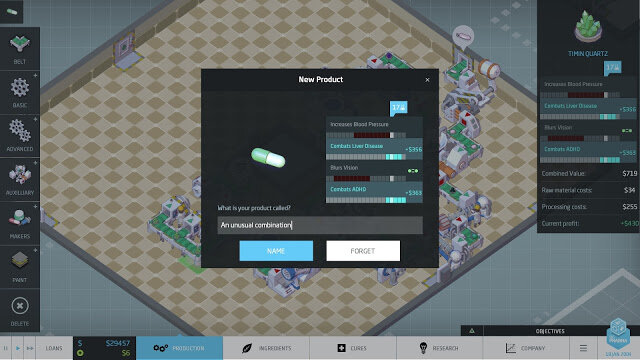 Once you get used to how things work and the way machines hook up to each other, the game becomes more challenging. Your goal is to make money, so upgrading machines and production lines to improve the drugs is one of the first steps. Better drugs = more money. But with this, there is a catch. Typically this will take longer due to all the processes required, so while the money is better - it's slower. So then you've got some decisions to make: do I make more low-quality medication to crank them out faster, or do I just accept that it'll take longer? I tend to fall somewhere in the middle, having my main set of production lines on the go, with some faster ones to fill in the gaps and increase my profits faster.

Games such as Theme Hospital were my jam when I was younger, and I really enjoyed the humour involved so I think that really draws attention to the fact that that's exactly what this game is missing. I know that Big Pharma is not the same as Theme Hospital, but playing this just makes me pine for a new TH more than ever. The art style here feels quite drab and boring, and the layout of a lot of things makes the game feel like more of a chore than it should.

As mentioned before, I really enjoy the repetitive aspect of games like these but after a while I did find it fairly tedious due to frequently having to wait around for things to complete. Thankfully there is a fast forward option that can be toggled on and off to allow you to speed up the process somewhat, but even with this it did still seem to take a while longer than I'd like. Something just feels missing, as it would be good to have other things to keep you busy whilst you are waiting on a production run ending, but right now it's pretty limited. Priced at £24.99 on the Xbox Store, it's probably more expensive than I'd value it, so I'd suggest for you to wait for a price drop if you're interested in playing. If you don't have a lot of patience to handle management sims, then I'd recommend you to give it a miss, as it requires more patience than most.